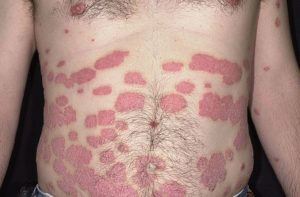 Psoriasis is a chronic inflammatory condition of the skin and nails, which causes patches of thick, red skin covered with silvery scales.

The word psoriasis is derived from the Greek word “Psora” and “Iasis”.

In this condition Life cycle of skin cells is accelerated due to autoimmune response. Skin cells rapidly build up on the surface of the skin to form scales.

Major problems are also the psychosomatic complaints and the restriction of the quality of life of the patients.  It is estimated that about two and a half to three and a half percent of the Northern Europeans are affected by psoriasis. The cause is an inherited genetic predisposition. Even if this is present, however, the disease does not always have to break out. However, various factors are known,

More than half of those affected suffering before age 40 for the first time from psoriasis (type 1 psoriasis). The rarer type (psoriasis) does not break out until the fifth to sixth decade. In childhood, psoriasis – compared to eczema – is quite rare.

It is a non contagious disease. The disease usually proceeds chronically or in recurring episodes, whereby shorter or longer acute phases can alternate with periods without or with few symptoms. Severity and extent are individual and very different.

According to research about 30 to 40 percent of people with psoriasis claim that relatives are also affected. It also happens that no parent has psoriasis, but the common child still suffers. And vice versa: Both parents suffer from psoriasis, but the child never breaks out of the disease.
Investigations on the frequency of heredity showed clear indications of a more strongly transmitted father-transmitted heredity effect. The probability of inheritance in a child with only one affected parent is around 10 percent. If both parents suffer from psoriasis, this risk increases to about 30 percent.

If, in addition to the inherited predisposition, certain personal or environmentally induced triggers are added, the disease breaks out.

Psoriasis patches can range from a few spots of dandruff-like scaling to major eruptions that cover large areas.

Most types of psoriasis go through cycles, flaring for a few weeks or months, then subsiding for a time or even going into complete remission.

The symptoms of common psoriasis (psoriasis vulgaris) are mainly the result of a benign, rapid, uncontrolled growth of the upper skin. The cells of the uppermost skin layer (epidermis) “migrate” to the skin surface seven times faster than in healthy people. Normally, the upper skin is renewed within 28 days. This takes only three to four days for psoriasis patients.

The result: shiny, silvery-white scales form on sharply defined, strongly perfused and inflamed red skin areas. It affects the scalp, but also the buttocks, chest and back area , sometimes also eyebrows, armpits, abdominal or sexual organs, or the anus. Problematic because of the visibility are the face, the hair and the hand. Itching occurs.

The scales can often be lifted with the fingernail. Psoriasis vulgaris is the most common form of psoriasis. There is also a shape with preferential infestation of the large fold regions such as armpits, groin, navel and folds, palm and palms. In severe cases the whole skin (erytrhodermia) can be infected.

It is characterised by sharply defined erythematosquamous plaques usually distributed fairly and symmetrically. The word Plaque is used to describe the well defined patches of red and elevated skin. It is also called as Psoriasis vulgaris. The sizes of the lesions vary from coin-sized to palm sized or larger sometimes. Most frequently scalp is involved.

This is characterised by erythematosquamous papules which are distributed like drops on the skin surface. The word Guttate means drop. In this condition trunk area of the body is mostly affected.

It is characterised by totally generalised erythema and scaling.

The unique distribution of this type of Psoriasis is extensor region of the limbs. Occasionally it may occur in flexor regions of groins and axillae and intra mammary regions. The lesions in these areas are not very dry. Hence there is reduced scaling but itching persists.

About one in five psoriasis patients who are in treatment also has psoriasis arthritis. In this case, sufferers also suffer from joint or vision problems as a symptom of the disease. There are four different types of joint which can lead to very different deformations. However, the usual skin changes do not always have to occur simultaneously or additionally in psoriasis arthritis.

Usually there are swelling of the small joints of the toes or fingers. The swelling is painful and hinders the movement. In another course, larger joints, such as the knee joint, are affected. A third variant prefers the spine.

In this form, purulent but germ-free pustules occur, in particular, on the soles of the feet and the palms of the hand. Running and working with the hands can therefore be very painful for those affected. In extreme cases, the whole body can also be affected. Then the whole skin is reddened and littered with pustules. In addition fever , fatigue and a severe feeling of illness are often added. This severe variant affects less than five percent of all psoriasis patients. Another form is the attack of the hands and sometimes also of the feet, triggered by a work-related irritation and / or allergy, which can be recognized as a occupational disease.

Lesions occur on Seborrheic sites such as Sternal region, flexures, axillae, groin. The scales in these sites silvery and greasy type.

In Ayurveda, all skin diseases are grouped under a broad heading of Kushta Roga.

Signs and symptoms of Psoriasis can be correlated with Sidhma, Ekakushta and Kitibha diseases in Ayurveda.

Management and treatment of Psoriasis in Ayurveda

Repeated Shodhana is recommended. Internal purification and detoxification by Panchakarma is highly effective in Psoriasis. 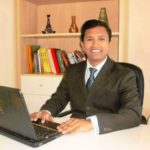